Some may not be aware that TAP is the only league with a "traveling" National Tournament.  Each year the Tournament is held in a different major city, giving our players a chance to not only play against the best, but a chance to experience competitive billiards in all areas of the U.S.

Our upcoming Titleholder's Tournament (May 5, 2018) is the final qualifier "feeder" Tournament for the Master's being held in August (date TBD).  This will determine who advances to the  2018 National Championships, being held October 31 - November 5 at the Pheasant Run Resort outside of Chicago, IL.

Please note (this is VERY important):  All players who are on teams for the upcoming Master's Tournament have the chance to go to the National Championship.  In order to qualify to play at Nationals - whether with a team or in any other format (singles, doubles, scotch doubles, etc.), you MUST have played at least 6 matches in a period (TBD) before the National Tournament.  If you do not have at least 6 (regular season) matches recorded in PoolNet, you will not be qualified to play at Nationals, regardless of whether your team makes it or not.  This is a strict policy for the National Championship and IS enforced.

The Road to Nationals

The road to TAP's National Championship Tournament starts with each Summer Session and culminates with our Annual Master's Tournament, usually held in August or September of the following year.  Here's how it works:

Qualifying sessions for Nationals are in this order: Summer, Fall/Winter and Spring.  Each Session lasts 14 weeks and yields 6 teams, per division, that advance to the first qualifying tournament, Titleholder's.  The teams that advance are determined by the final, regular season, standings - 1st Place, 2nd Place, 3rd Place and 2 Wild Card teams, determined by draw.

The Master's Tournament, usually held each August, is made up of the teams that qualify from each Titleholder's Tournaments (Summer, Fall/Winter and Spring) and takes place over a 2 day period.  The format is as follows:

Each of the 24 teams plays head-to-head in 6 brackets of 4 teams.  Teams play 3 matches and earn points for wins.  These points are accumulated and tallied at the end of the day with the top 16 teams advancing to the Championship round on Sunday.

Teams advancing to this final round will play in a single-elimination format to determine the top 2 winning teams that will represent TAP THIS! at the National Championship Tournament.  The First Place winner will earn an all-expense paid trip (airfare, hotel and entry fee for up to 8 members - no cash will be distributed).  The second place team will earn their entry fee - this fee is paid directly to the National League on behalf of the team. 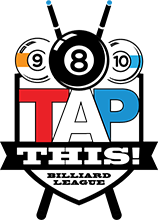